Purveyors of the Uniq Mezcal is gaining ground worldwide as drink connoisseurs clamor for more history, soul, and tradition in their glasses. Andrea Villela, the founder of La Fiera Mezcal, joined some of our seekers in Mexico for some mezcal tasting - with a serving of history on the side.

La Fiera Mezcal is a group dedicated to bringing artisan mezcals to tables across Mexico. It was birthed in one of the nine Mexican regions that produced mezcal: the state of Guerrero. Andrea, who grew up in Guerrero, knew mezcal as a typical part of the meal table during baptisms, weddings, birthdays, and the like. One day, her mother brought a bottle of mezcal to a family book presentation and it became an instant hit. La Fiera Mezcal was born not too long after. Passion fruit is added after agave cupreata is distilled

Often confused with tequila, Mezcal is a type of alcohol made from agave. Mezcal is not necessarily tequila but all tequilas are mezcals. While tequila is made specifically from blue agave (agave tequilana), Mezcal broadens its horizons to include a wider range of agave-based liquor. The two also differ in distilling processes and are usually made in different regions of Mexico.

Unlike tequila, however, a certain mythicism grounds mezcal to community and land. The Spanish conquest of Mexico introduced mezcal as the first distilled spirit in the Americas. The mezcal is also thought of as a drink for the soul because of its healthy spirit. It prides itself in tradition, which makes it more attractive to connoisseurs worldwide.

The bottles are hand-painted by artisans from the Montaña Baja. Leftover paint from making traditional tigre masks are used. The bottles are hand-painted by artisans from the Montaña Baja

Mezcal is typically served with traditional snacks before a meal in Guerrero. Some of these include stems of the Hoja Santa leaf called tlalnipal, local cheeses, chalupas, pozole de frijol or bean pozole, and a specific guacamole recipe called aguacatada. Seekers get a taste of Guerrero's artisan mezcals

Our seekers were treated to some of La Fiera Mezcal's passion fruit curado, which is made from adding the fruit to distilled agave cupreata. Some of La Fiera's tasting menu also includes natural mezcals "berrico" and "publio", mezcal de pechuga "publio", damiana curado, and even a smashed maguey worm curado (yes, you read it right: it is made from real worms). Salted pumpkin seeds are only one of Guerrero's traditional mezcal accompaniment

More than a mezcal curator, Andrea likes to think of herself as a mezcal explorer. Her exploration typically consists of asking around towns in Guerrero, which once even led her to a 50-year-old mezcal bottle.

La Fiera Mezcal envisions a recognition for Guerrero traditions. This humble movement will continue to grow slowly but steadily until Guerrero's artisan mezcals are celebrated around the world. 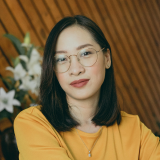 Also in Purveyors of the Uniq

At Home With Ces Drilon

Seek The Uniq x Casama: Meet Colleen and Brian, the Duo Behind the Exclusive Collab

WELCOME TO SEEK THE UNIQ

We think you are in and we've set your currency to ()